Character is a set of mental and emotional qualities that determine the behavior of each individual. The word character is of Greek origin “kharakter ” through the Latin ” character” which means ” the one who records”.

The character differentiates and makes an individual, group of individuals, animal or object special. The character or personality is determined by the social environment and culture that each human being belongs to, which helps to establish the conduct and morality of the person, for example: it can be said that a person has character, that is, an individual who it imposes its decisions and does not change its ideas for any circumstance, it can be said that it adopts a position of leader, it is also observed in the animal world.

Each person has a different character, which influences their emotionality, the way they react and the response capacity they contemplate for the different situations they face every day, which is why there are emotional, passionate, sentimental, nervous people , apathetic, among others.

In the area of ​​biology, character refers to the different traits that are used for the description of living beings. The characters can be: anatomical, morphological, genetic, geographic, physiological, behavioral, among others. Also, the characters can be qualitative or quantitative, the first ones as indicated by their name must be measured or counted to be described.

On the other hand, in computer science, the term character encompasses two meanings. First, it is a unit of information that corresponds to any letter, number or symbol similar to those of the alphabet and secondly, it includes control characters that are a piece of information that is used to process text, printers, among others.

In literary or artistic works, character is originality and style. Also, it is a brand that is printed, painted or sculpted on something.

In addition, the term character is the individualization of the elements that make up a whole, which helps to obtain a detailed study to obtain a better understanding.

In biology, in the study of genetics these two characters are analyzed to perceive the traits of an inheritance. The dominant character refers to the member of an allelic pair that manifests in a phenotype, either in double dose (one copy of each parent, known as homozygous) or single dose (a single parent contributed to the dominant gene, known as heterozygous ).

The recessive character does not manifest itself by virtue of the presence of a dominant gene, for a recessive allele to manifest itself, two copies must be present, that is, one of each parent.

The amphoteric character is an expression of chemistry and biochemistry. It is a characteristic of certain substances that has the ability to behave as an acid or base, depending on the reaction in which it participates, as in the case of aluminum oxide (AL2O) and amino acids. 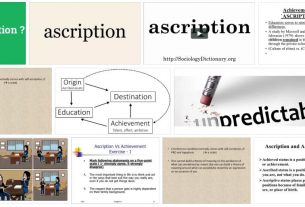 What is the Definition of Ascription?

What are the Definitions of SEO and SEM?